The old castle Soteska is one of the more modest Slovenian castles. It is mentioned for the first time in 1145 as Taeure and 1313 Teber. Johann Weichard Valvasor reported that in 1231 it was owned by Rudolf and Ulrich from Ainöd. Due to its characteristic Romanesque building, its formation dates back to the 12th century. It was often referred to only as Ayned, in 1444 as haws (tower house) an der Aynod or hauss in der Aynod, while the turren (tower), der höch öder turren can not be regarded as the castle. It may have been just an exposed tower, a propugnaculum, one way or another connected to the old fortress.
Historians believe that the castle was initially in possession of the Spanheim ministerials nobleman of the Tschernembl, then the Carinthian Dukes, and after the year 1277 the Counts of the Gorizia. In 1326, the first documented owners of the castle the, Goriz vassal, Herman Ainöd, brother of Henrich of Tschernembl, appeared. After that, his descendants dwelt in the castle until the widow of Erasmus of Ainöd in 1444 left the castle, and all other estates to nobles from Scheyer. Historian Anton Kaspret thinks that the knights of Scheyer gained castle in 1448 trough wedding.
The castle is supposed to be damaged by Herman II. from Cilli in the war with the Habsburgs. Gasper’s son Jurij-Jörg later built a new tower house building on the other side of Krka River, fortified with towers and walls. At the site they later built a mansion with a rich park, the ruins of which are still visible today. In 1506 the castle was supposed to be abandoned. 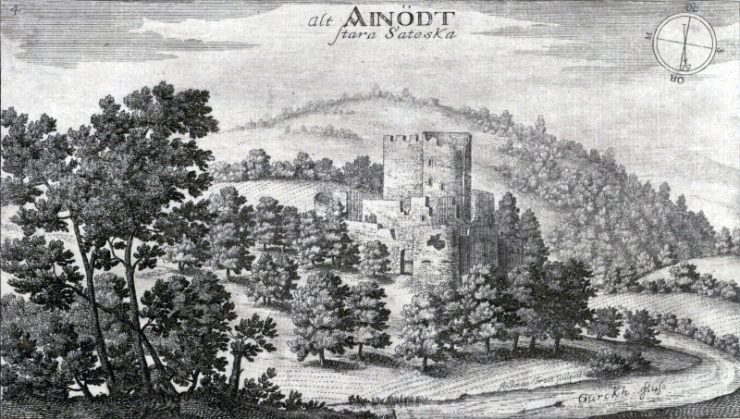 Litography made by Johann Weichard Valvasor in 17th century

Johann Weichard Valvasor wrote in the 17th century that the Soteska castle was once surrounded by triple crown walls of towers. Castle had a dungeon cut in the rock, where the captured Turks were held. The Turks gave the castle a special name – Green Castle. 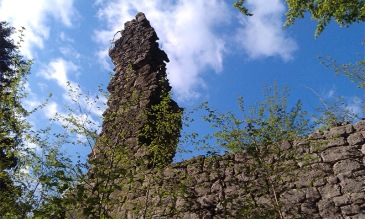 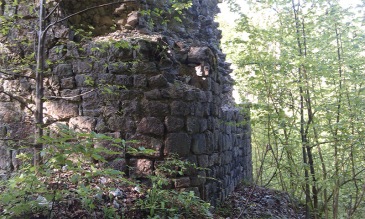 Images made by Vigilant Knight