In 2015 I created a 3D reconstruction of a Slovenian castle Brežice (Rann). I created how the castle supposed to looked like before its masive extensions in the 16th century. I made quite a few mistakes that I noticed only later, but nevertheless it gives me at least a basic idea of building stages.

Reconstruction was made using program SketchUp. 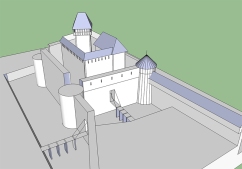 Model of 3D images was made by Vigilant Knight